2017 was the year of creator’s regret, with several tech industry leaders anguishing over the unintended consequences of their creations. Elon Musk warned that we are “summoning the demon” with artificial intelligence. Other Silicon Valley insiders – Sean Parker, Tristan Harris, Justin Rosenstein, and Loren Brichter – lamented the impacts of social media on our lives and democracy. Former vice president of user growth at Facebook Chamath Palihapitiya confessed, “I feel tremendous guilt” for his part in “eroding the core foundation” of basic human decency. In biotech, Jennifer Doudna published a book about the gene editing technology known as CRISPR in which she relates a nightmare where Hitler asks her about this new discovery.

As it happens, 2018 is the bicentennial of Mary Shelley’s Frankenstein, the locus classicus for tech-hubris leading to ruin. Much will be said this coming year about how Frankenstein applies to our times. Although the parallels are obvious, the nineteenth century monster is actually a limited archetype for understanding our twenty-first century techno troubles. It does a good job highlighting the problem of technological thoughtlessness, but it doesn’t get at the deeper problem of carelessness. For that, I propose a new archetype: the honey badger. Shelley’s novel is soaked in the morality of romanticism with all its passion and earnestness. We, however, sup listlessly from the teat of mass culture, downing soda in our sweatpants at Walmart thumbing through a newsfeed for our drips of dopamine.

Victor Frankenstein was no hero, to be sure. But he’s not necessarily a villain either. He didn’t intend harm, and once he realized what he had done he felt remorse and, in true romantic form, he devoted his life to the dogged pursuit of his monster. Of course, once the genie is out of the bottle it may be too late to do anything about it. Technologies, like Frankenstein’s monster, take on lives of their own. But at least Victor tried. At least he had a heart. So too with some of our contemporary Frankensteins: at least they care.

Not so with the honey badger, the cobra-chomping, chaos-generating animal that just doesn’t give a shit. Stephen Bannon, Donald Trump’s former right-hand-man, embraced the honey badger as a campaign strategy. He got inspired after watching angry young men get lost in World of Warcraft, where they could pretend to be much tougher than they actually are and, disinhibited by the internet, they could say foul things they would never say face-to-face. Donald Trump, the don of fake wrestling, has since governed as the honey badger in chief, transgressing every kind of norm imaginable: social, democratic, moral, and intellectual.

True, you could spin the honey badger in a positive light: self-confident, determined, and fearless. You could even seem him as a revival of the romantic urge for authenticity. In a society stifled with bureaucracy, Bannon sold Trump as a dose of reality, as someone who cuts through the political correctness to tell it like it is. But no he doesn’t. He insults, swindles, lies, simplifies, and demeans. This isn’t about boldly pursuing some ideal in the face of hardship – as Frankenstein did first in creating his monster and then in trying to destroy it. That would be a form of giving a shit. Not giving a shit is about unscrupulous selfishness.

Being Frankenstein is about making something without thinking about the consequences. Being a honey badger (like being an internet troll or a spoiled brat) is about taking whatever you want, consequences be damned. It’s grabbing crotches and bragging about it. In some sense, the original political honey badgers, Bannon’s distant inspiration, were the sophists. Democratic citizenship requires being able to reason and speak well. The sophists taught this art. So far so good. But when you marry these skills to relativism and inculcate them in people of low moral character, trouble starts brewing. People calculate things to suit their own advantage, even if it is harmful to the polis. During the campaign, Trump said that gaming the system to avoid paying taxes, “makes me smart.” Yes, clever like Thrasymachus and the wily, beehive-smashing honey badger.

Martin Heidegger once quipped, “The most thought-provoking thing about our thought-provoking time is that we are still not thinking.” In one sense, that couldn’t be further from the truth. This is, after all, the knowledge society. We invest billions of dollars in research and we are constantly thinking up new gadgets. Bannon engineered Trump’s improbable victory through a masterful use of analytics and the processing of enormous amounts of data. But that is all instrumental thinking about the means. We don’t think much about ends and purposes, about being and living well, or about the common weal and greater good.

Victor pursued his ambition “with an ardour that far exceeded moderation,” but when he finished, “the beauty of the dream vanished, and breathless horror and disgust filled my heart.” That’s because despite all his instrumental thinking he wasn’t really thinking – not about why he was pursuing this knowledge or about its wider ramifications. Nowadays, the National Science Foundation would ask him to first complete a broader impacts statement justifying his research. Of course, this too has become a form of pseudo-thinking as ‘broader impacts’ becomes slang for economic growth.

The mention of funding agencies suggests two ways in which Shelley’s monster, like her morality, is an anachronism. First, it was the product of early nineteenth century vocational and small-scale natural philosophy. Science is now Big – involving legions of actors – which muddies the question of responsibility. Thinking is not just instrumental, but hive; it’s specialized and distributed across networks. No one is really in control and there is no pinch point (like Frankenstein’s lab) where we could just turn off a potentially dangerous development.

Second, Shelley’s monster is too much of an outsider. In one sense it is a detestable hybrid composed of a mix-match of parts. But in another sense it is all too pure. Frankenstein’s monster lives on the edges of the social world. It was never really enrolled, recruited, or folded into things. Our technological monsters, by contrast, are woven into the fabric of human life. Frankenstein’s monster was never commercialized or used. Our technologies, though, are making somebody profit and they even go beyond that: they become needs.

The internet and fossil fuels simultaneously sustain and imperil us. Now those are abominable hybrids! And they don’t sustain or imperil all of us equally – it is a congeries of winners and losers. Indeed, whereas Frankenstein himself suffered the most from the bad behavior of his creation, our modern creators from entrepreneurs to corporations to entire wealthy nations are usually the ones who suffer least from negative consequences.

Stephen Jay Gould argued that the moral of Frankenstein is not that Victor shouldn’t have made the monster, but that he failed in his duty “to teach his own charge and to educate others in acceptance.” Certainly modern day creators should take this lesson to heart. But my point is that any moral focused on Victor is antiquated. There is no Victor anymore – no single individual responsible for both creating and instructing his progeny. We can talk about Musk and the other big names all we want, but really they are just about as powerless as anybody else. Our monsters are a collective action problem, which introduces the deeper issue: no one cares.

Imagine if Victor never gave another thought to his monster once it was created. Thought only comes with motivation – the object of thought has to matter to you. But our monstrous technologies mitigate against this mattering. We fill up the car but don’t see the refinery, we buy the cellophane-wrapped meat but don’t see the slaughterhouse, and we work in the office but don’t see the steel mines that built it, coal mines that run it, or garbage dumps that follow it. As Heidegger would say, the world is obscured or covered-up. We might know abstractly that to sustain our lifestyle we must plunder the planet. But it is not present-at-hand; it is not a matter of concern. Thus, we go on living our decadent lives as if, well, we don’t give a shit.

Or imagine if Victor visited the murder scenes left behind by his monster only to point out the circumstantial nature of the case. Is there actual video footage of the killings? Even if there was, who can trust video nowadays in the age of digitally-resurrected movie stars? Then imagine him smugly shrugging the whole thing off as a hoax or as fake news. That’s not how the novel went, but that’s our reality. Gould said that the makers of monsters must educate others to accept them, but that’s precisely what the tobacco and fossil fuel industries do. And now that Scott Pruitt is in charge of the EPA we are learning how to accept all sorts of misunderstood chemicals, not to mention misunderstood climate skeptics.

For all the spine-tingling qualities of her novel, Shelley didn’t plumb the dark depths of power-hungry moral depravity. And she assumed a reality principle that we can no longer take for granted. Frankenstein’s monster was out of control, to be sure, but at least that was plain to see. But now? Who knows and, really, who cares? 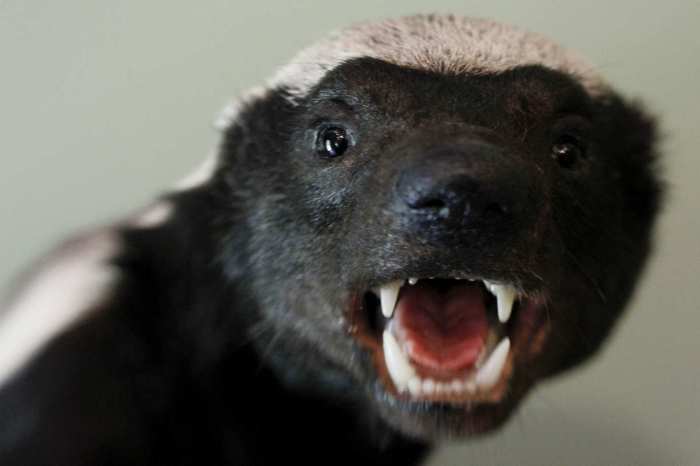 One thought on “Monsters and Honey Badgers”